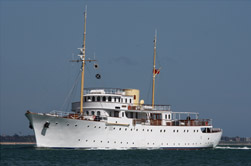 The Superyacht Shemara took three years and one million man hours to renovate, reconfigure and partly rebuild. This yacht was originally launched in 1938 and was well looked after by its first owner Sir Bernard Docker, who was an industrialist.

However, after being sold at the end of the 1960's the second owner left the boat docked for a number of decades. Unfortunately, this meant Shemara fell into a state of decay. One minute the largest yacht in existence for the rich and famous, then the next left and forgotten for many years on end.

About seven years ago today in 2007 the third and current owner, saw the boat in a magazine and instantly fell in love with it. They then decided to take on the massive task of restoring it to its former glory and that's exactly what they achieved.

As the project began the owner recruited a number of contractors, electricians, and architects etc. to help them accomplish the restoration. Some of the companies involved in the rebuild included: Ex- BAE engineers, Burgess Marine, SEC, Design Unlimited and dozens of subcontractor companies.

But where did the Graitec Design Team come into this?

Initially the Graitec team went over to provide additional Inventor modelling support for a month, but ended up working with the team providing support for 7 months, working on structural elements, through to piping, HVAC and electrical system layouts, along with some more interesting elements such as modelling up spiral stair cases. 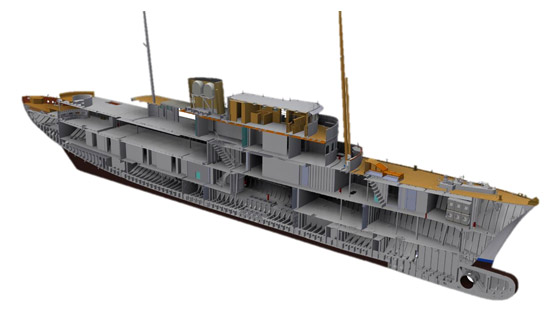 Tony Jones from Graitec who worked on the project said 'It was a very interesting job to be involved with, and provided quite a unique challenge because there aren't really any flat faces or surfaces to work from on a boats structure, and the team at MyShemara were great to work with'.

To find out more on the Shemara Yacht and the rebuild then head over to Boat International website and read their blog post.

Alternatively, If you want to find out more on the specialist projects and services we offer, obtain a quote, or discuss a project the give us a call today on 023 8086 8947. If you want to see more of the Graitec projects then take a look at our YouTube page or our Graitec Professional services pages on our website.