Benefits of Updating Your Printer From Older Technology

Let's travel back in time and go through a little bit of history. Way, way back... in 1953 the first ever printer for a computer was created by Remington Rand and this was made to be used with the Univac Computer, the second (commercial) computer produced in the US.

Soon, or not so soon after this the first laser printer was made, and this was called EARS and was in construction for approximately 2 years before being released for usage in 1977.

Roughly one year before the release of 'EARS' Hewlett-Packard, which is a name that some of you may recognise, invented the inkjet printer but this took another 8ish years to be released on the consumer market. In 1922 they then released a laser printer that had a 600x600dpi resolution and let's just say this changed the future for the better.

Now let's bring this time travel back to the 21st century. I'm hoping that none of you have a printer that's that old (although that would be pretty impressive), but in this blog post I'm going to talk about the benefits of upgrading your old printing technology, after all with the rate that technology develops and improves we may as well take advantage of what is available until it is outdated by the next 'wow' factor.

So what exactly are the benefits of upgrading from older technology?

When you upgrade you will obviously be able to utilise a range of new features that that weren't on your antiquated product. This may include the option to scan to a number of devices and even the 'cloud' which will give you the confidence that all your documents are all stored in one place without needing several PCs/laptops to do this.

A big bonus that you will find when you upgrade is that you will save time, as generally modern printers print ten times quicker than older printers so you won't have to wait around for long periods of time.

Touch screen control panels are something that most printers now have. You can easily carry out different options such as scan, copy, configuration with the touch of a button. Furthermore, almost all printers available are wireless meaning you don't have to have numerous ugly wires connecting to your computers USB ports.

Printers now let you print double sided which saves paper and because they print in less time and this also saves energy too. Furthermore, you can now purchase recyclable printer cartridges which do your bit to save the environment.

An upgraded printer means it's more efficient because it prints more copies of your work in less time and also uses less amounts of ink. It also means you don't have to go and print your work in other places which would be more costly in the long run.

A main advantage of upgrading your printer is that the quality significantly improves. You can change a number of options depending on how you want something to be printed and the compatible inks for the printer allow for high quality images at all times. 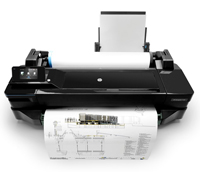 Do you remember the days when you had a scanner, photocopier and a printer separately? Well the majority of printers have incorporated the scanner and photocopier in all one, which is definitely more convenient; for students, business professionals and just for home usage.

It also allows you to save space and saves you money because you don't have to buy multiple devices.

Well, I hope that I've provided you with some knowledge on why you should upgrade your printer. It is definitely for the best if you want something that lasts for a long time and prints things at the speed of light making your work more efficient.

On that note, at Adris we sell a number of large format printers that are new and also factory refurbished and these are all sold for low prices.

If you are interested in updating your old printer and are interested in finding out more on large format printing (recommended for businesses) then check out our Large Format Printers page or give us a call to discuss your requirements.