Come on now, be honest with me. Between you and me, have you ever received a CAD model that is just what you need, but has been modelled in one of our competitor’s products?

Interoperability has long been a bone of contention between CAD vendors, but it is rapidly becoming a thing of the past as agreements are made to be nice and share.

That my good friend, is a game changer! 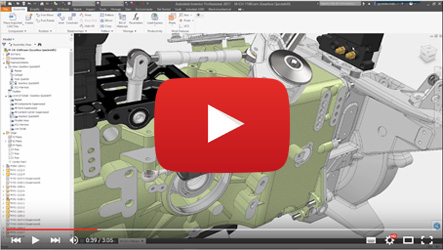 You may have already been experimenting with AnyCAD in Inventor 2016, so what’s new in AnyCAD 2017?

The following files can be referenced into an Inventor model without being converted.

(No love for SolidEdge yet :/)

A link to the selected file is maintained which enables you to monitor and update your Inventor model as the referenced model is edited in its native CAD package.

The referenced model can also be adjusted inside Inventor using Inventor’s direct edit tools. The direct edits will update on top of the changes to the native file. (Within Reason!).

The AnyCAD importer supports multithreading, allowing Inventor to use multiple cores on your PC to crunch the data.

AnyCAD does a great job of preserving metadata (iProperties) from Imported or linked files.

These iProperties can be used in your BOM and parts list for your Design.

AnyCAD 2017 allows us to override that iProperty information on import. Overridden iProperty values are highlighted in Blue.

You can now reference a STEP file into Autodesk Inventor. This allows you to re-export a CAD file from a non-supported CAD system as STEP, and overwrite the existing STEP file. The STEP file will then update inside Inventor.

You can still import a STEP file if you don’t want to maintain a referenced link. The step file will be converted into an Inventor .IPT or .IAM file.

TIP: Inventor will automatically detect whether the file you are importing is a part or assembly, and it will choose IPT or IAM accordingly.

If you want to import an assembly into a single part file, start by opening a part file and use the ‘IMPORT’ tool, instead of ‘OPEN > IMPORT CAD FILES’.

My favourite feature of the AnyCAD toolset is the ability to link 2D AutoCAD DWG files into an Inventor Part (IPT) file (Kind of like X-References in AutoCAD).

The linked AutoCAD files are also ‘Live’, meaning that they can be updated in AutoCAD and that the DWG underlay in Inventor will update.

This can be used to ‘Drive’ 3D Inventor components from a 2D AutoCAD file, or as a reference in an Assembly file when laying out components to a 2D site plan.

DWG underlay has received some neat improvements, including the ability to Crop linked DWG files.

One massive new feature is the ability to include linked 2D DWG files in Inventor drawings (Awesome!).

Did you know that you can also drag and drop to import individual or multiple part and assembly files?

Select the part or assembly file in Windows Explorer, and drag the file to the Inventor title bar.

This action translates the part or assembly into a new Inventor file, and it can be done with or without an Inventor file open.

This action translates the part or assembly into a new Autodesk Inventor file.

With a new or existing assembly open, select the part or assembly file in Windows Explorer, drag the file into the graphics window.

It places the imported part or assembly as a component in the Inventor assembly.

Check out our previous blogs if you would like to know more about what’s new in Inventor 2017!

More posts from author
Thursday, 03 May 2018 How To Share Inventor And Fusion 360 Designs With Desktop Connector And AnyCAD
Friday, 21 July 2017 How Do I Sign Up For Autodesk Fusion 360?
Tuesday, 18 July 2017 Fusion 360 Document Management And Design Collaboration