Since being raised from the seabed thirty years ago, the Mary Rose has been undergoing a restoration program to safeguard this unique part of history. The first phase of the project was to drench the structure with a chemical mix designed to be absorbed into the hull to prevent rotting. 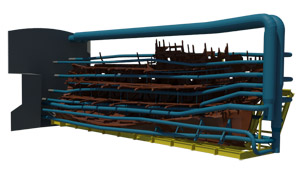 The drenching phase is now coming to an end and the restoration project is now moving to the second phase which is to dry it out the hull in a controlled and carefully calculated manor, using a flexible ducting system in order to eliminate the potential of further degradation to the structural integrity of the timbers.

As there were no viable CAD plans of the structure or its hand built support system, the existing structure was laser scanned to produce an as is digital representation of structure in situ, and a proposed flexible ducting model was also designed in a disparate system.

The converted point cloud data with 3D proposed ducting layout needed to be brought together to produce accurate and detailed installation drawings and to identify any areas of potential or existing clashes between the hull, support structure and proposed ducting system.

Before being referred to the Adris's professional cad services team, the contracting company were working to a very tight time schedule had approached a number of companies who were unable to bring together the complex data set and produce the required accurate drawings. 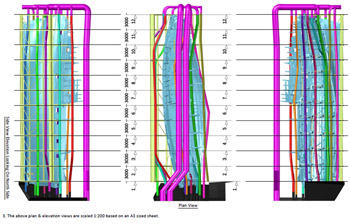 Within two weeks of being approached to see if we could offer assistance, the Adris professional CAD services team managed to combine the complex data set, identify the clash information and produce the sectional cad data required for accurate placement of the ducting and supporting rigging system, bringing the project back on track.

Finance Your Route To Technology Adoption For A Faster ROI